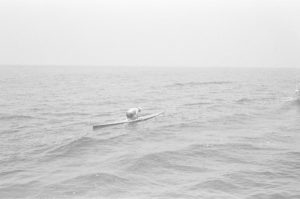 The waters of the Catalina Channel have challenged humans since Catalina Island was first populated 8,000 years ago. The native people called their island Pimu and themselves, Pimuvit or Pimungans. They were related to the mainland Tongva peoples. They plied the ocean with their plank canoes or Tiats, travelling among the other Channel Islands and coastal villages.

In 1542 the Pimungans welcomed Juan Rodriguez Cabrillo and his ship “San Salvador” to the island shores of Pimu. This first contact event marked the beginning of the Spanish conquest of the peoples and lands that would become California. Cabrillo claimed his discovery for the Spanish Throne and renamed Pimu, San Salvador, after his ship. Cabrillo’s crew carried European diseases that the natives had little immunity against, so the robust and handsome peoples he first encountered would not resemble those seen later.

In 1579, the English privateer, Sir Francis Drake was believed to have visited Pimu while searching the Pacific Coast for Spanish Galleons to plunder. Stories of hidden treasure continue to live on in many adventurers’ imaginations.

On the 24th of November 1602, on the eve of St. Catherine’s day, Spanish explorer Sebastian Viscaino sighted Pimu and renamed it Santa Catalina, honoring St. Catherine. The Spanish Mission System was well established by 1768, relying on the surviving native population for manual labor.

By the 1820’s, most of the last Pimungans found themselves at the San Gabriel Mission, where the Padres called them Gabrielinos. Spanish rule gave way to Mexican occupation and costly tariffs were levied on foreign trading ships, and as a result, many skippers offloaded on Santa Catalina Island. So, entered an era of smugglers, pirates, illegal fur seal hunters, miners and assorted fortune seekers. In 1846, days before the U.S.A. invaded Mexico, the Governor of Mexico, Pio Pico, granted ownership to a naturalized citizen of Mexico. Thomas Robbins established a rancho on the village of the Pimungans, Catalina’s Isthmus.

In 1848, with the Treaty of Guadeloupe Hidalgo, Catalina Island became part of the United States. In 1864, during the American Civil War, the Union built a garrison at the Isthmus. The Banning Bros. purchased the island in 1891, financed by the family’s Wilmington Transportation Company. They built a hunting retreat and established regular shipping to and from the island. Ownership of island has changed hands over these many years, but it was William Wrigley Jr. and his Island Company that has had the most lasting effect.

Wrigley had noted the success of the swimming of the English Channel and all the media attention surrounding it. He set out to duplicate such a spectacular swimming marathon to garner the world’s attention. He hired the best experts he could, setting the course as similar to the English swim, but just a mile longer, starting in Avalon and finishing at Point Vicente, 22 miles across the channel. The Wrigley Ocean Marathon was conducted on January 15-16, 1927. The winner take all prize was $25,000, with 100 men and women competing, only one finished; 17 year old George Young of Toronto, Canada, with a record time of 15 hours 44 minutes. Wrigley’s vision of gaining more attention for his chewing gum company, Chicago Cubs baseball team and his Catalina Island were realized. The marathon sport of channel swimming had come to America. Since George Young’s first swim of the channel, hundreds have followed.

An excellent read on the subject is, “A History of the Catalina Channel Swims Since 1927” written by Dr. Penny Lee Dean. Dean is a Catalina veteran and record holder. The Catalina Channel Swimming Federation is a non-profit 501 3c that organizes, conducts, and records the channel crossing attempts. It is only fair to give credit to our channel swimmers for not only being the first to cross the channel under their own power, but to inspire all other methods of self propulsion to follow in their path. 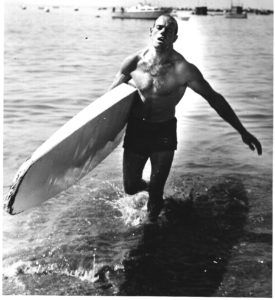